Chavez dies, possibly one of the first events of March I have been looking for as fears of violence ensue.

Someone sent me a link to a post from the WSJ today that said something about how the DOW likes to run when it sets new highs. The last time it set an all time new high was in October of '06. That run lasted 2,500 DOW points (22%), happened in the RE bubble and being that all markets were correlated (other than the NAS) they were chasing the '00 highs the SPX had. So, they were all chasing the high water mark of the SPX, none acting independently. In other words what the WSJ is saying is complete propagandist bullshit. Of course then JPM then destroyed LEH and the rest is unregulated history.

SPX Daily - All they have accomplished with the higher highs is make the current negative divergences even worse. I have patience. Do what they will with the markets, run the SPX to 1700 this year, go right ahead, that will not change or alter reality one bit. Greenspan said the markets are everything. They are the key to the illusion that all is well. The markets are all that's keeping this country together right now, thus they must keep going up and they may until .... well, you know what. 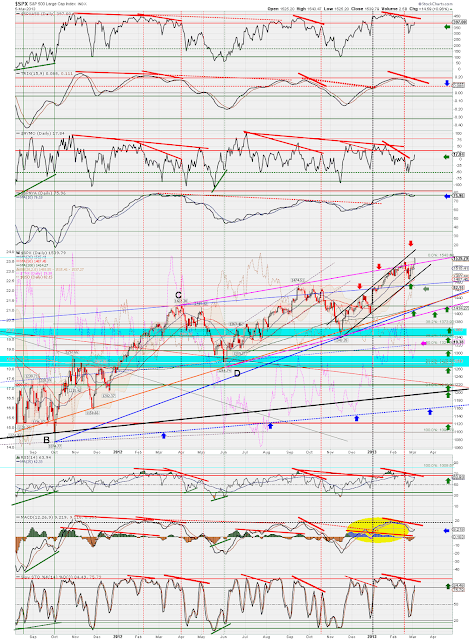 Minis 60m - OK 1544 and the upper white channel resistance discussed yesterday just missing the STB point this morning. Time for a reversal? I'd think a minor pullback is in order here. the recent surge has worsened already extended overbought conditions and has created yet another sinkhole under price where no support exists. They have run it 64 points in the past week. Why? 1586.76 is the magic number for the minis all time high. 42 measly points.

Three support points exist between upper white channel resistance here and lower channel support at the 1480 potential double bottom, 24, 11 and 91. I'll be watching the green NT channel support for NT clues and will patiently walk it down if (IF) it happens. Again, when their dogs get the scent of higher highs not much can get them off the scent or keep them from their prey. This is a pretty key near term moment at least for the bears.If this cracks to the upside you can count on all time highs for the minis. Since they are the one's left out of the party (and they used to lead the party) one should at least expect them to be made eventually. 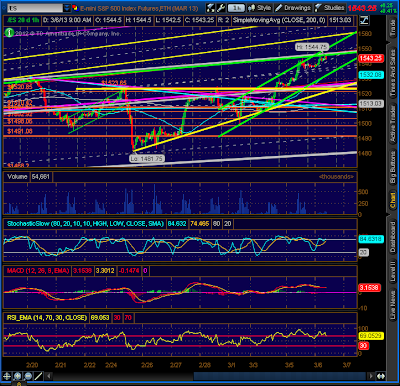