"It was shaping up to be another bloodbathed session, with the futures down 10 points around the time Shanghai started crashing for the second night in a row, and threatening to take out key SPX support levels, when the previously noted rumor of an imminent PBOC liquidity injection appeared ex machina and sent the Shanghai composite soaring by 5% to barely unchanged, but more importantly for the all important US wealth effect, the Emini moved nearly 20 points higher from the overnight lows triggering momentum ignition algos that had no idea why they are buying only knowing others are buying."

and then this follows -

"The May Durable Goods data released moments ago (which like in previous instances will almost certainly be revised downward subsequently but is enough to trigger kneejerk momentum response algos) was better across the board, printing at a 3.6% increase in May on expectations of a 3.0% rise, down from an upward revised 3.6% in April. Virtually all of the pick up in new orders was due to a surge in Boeing orders, which recorded 232 new plane orders, of which however half were orders (funded by still cheap credit) for planes still in the design phase. "

No, you can't make this shit up, but they can!

Daily SPX - Busted pink upper rising wedge resistance backtest competed. IF, if the bulls are gonna make a move this is their spot. I don't see how, but then again who could have seen "how" to any of this mess for the past 4 or so years? Travesty is a trite word these days that does little good to describe the rape of the financial system these days. They would need some form of divine intervention to take this thing to a higher high from here (and I'm not talking from above). The top was an E point overthrow of the final rising wedge formation of a multi-year "bull" market. She's working her way to oversold, but the only positive divergence is in the NYMO. Not that any of that matters. Just play the rumors and scalp their momo. That's all you need to do. 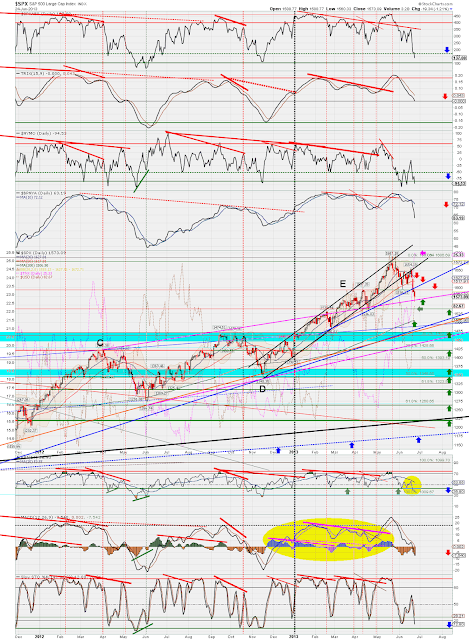 Minis 4hr - See that yellow support diagonal in the lower right corner? That is the cliff's edge. They are trying to avoid that (1548) at all cost. Green channel support is pretty evident as the 4hr has spiked thru but not closed below this line. If they can fight thru 1578 then 95 is the next stop. A backtest of the pink (LT channel support) should be in order. If it hits that, I'll call a top. 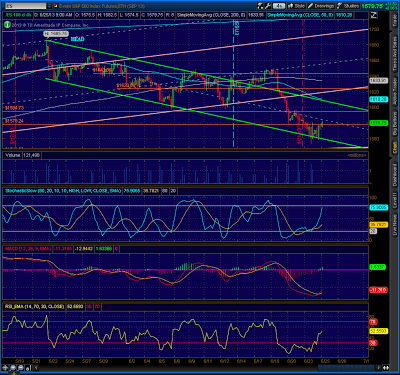