OK, the first thing you need to see this morning is a chart of the SPX futures. Not sure that many of you know that they were as low as 1213 last night (down 20). Nothing like a G-Pap resignation, a G20 summit and now a rate cut in the EU (the last spike) to make a THIRTY TWO point rally to stick save the futures cracking support and about to fall off a cliff. The bears got reamed this morning sans KY. 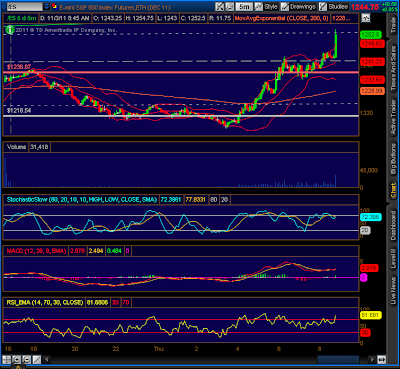 If you did not see the Afternoon Delight yesterday, it kind of puts the current situation in perspective. Dire does not do the situation justice. Moves like the above are to be expected. As STB has preached for years, the markets are all that is standing between "them" and total annihilation. The markets give the "illusion" all is well and stable. They must keep the markets afloat at all cost. Their back is against the wall and they will use any and all available measures to keep the illusion alive.

I'm really kind of speechless this morning, so here are some headlines -

Here is the MUST READ of the morning - who stole THE MF Global cash? We all know liquidity is the issue of the day. Cash is king and sacrificing one of your own for survival may become the norm. STB stipulates that if you are in cash at your broker dealer, you could be in a dangerous position. It may be most wise right now to be in a immunized position of 50% each SPY and SH. At least this way you know where your money is.

"The absolute craziest outcome would be that we learn that it was Goldman who closed the books and seized the cash last Friday (someone did). It would be even crazier if this leads to a problem that gets out of hand. There’s a decent chance that it plays out along these lines." On MF | ZeroHedge

"The Greek Prime Minister will resign, report says, after a split over holding a referendum on staying in the euro, and G20 leaders gather in Cannes to push for a resolution." Telegraph

"China is continuing to provide advanced missiles and other conventional arms to Iran and may be doing so in violation of U.N. sanctions against the Tehran regime, according to a draft report by the congressional U.S.-China Commission." Inside the Ring - Washington Times


Peaceful Occupy protests degenerate into chaos - My Way News. Looks like the Occupy Movement is testing the nerves of the 1%. And I ask, what Constitutional rights?


Daily SPX - RSI14 at 50 line which has been historical support. I'll still be surprised if the NYMO does not cycle to the -50 line. My November swoon call is still in full force. The drop to pop that I was looking for is setting up nicely so far. I am not so sure that price will be able to get up to set the divergences I wanted. There is a chance that 1257 here could be it. Will have to see. 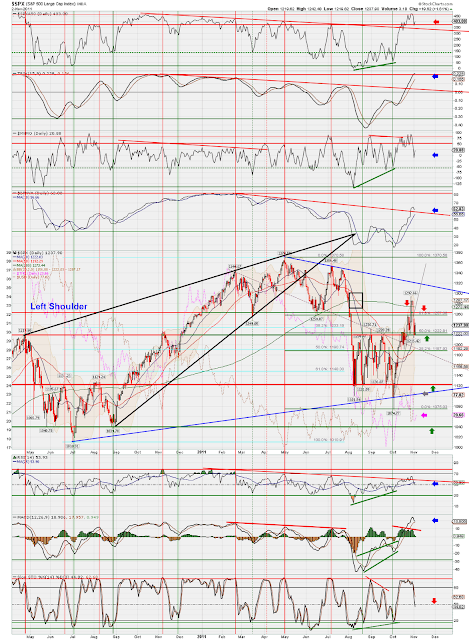 Minis 4hr - Yesterday late I threw out, "Pot shot - looking as a Shanky diag/ s/r backtest confluence - 1257 tomorrow at 2:00 on the minis will be the point. ..... if it does not go here as it looks like it should."  Well as you can see in this chart they reached that target a bit ahead of schedule. 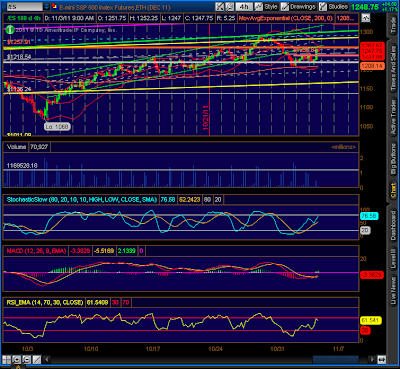 Minis 1m - Nice run hugh? 1257 resistance. See the green and orange diags? That is the confluence point I was referring to. Yesterday they crossed at 2:00 this afternoon. This morning they crossed at about midnight last night. That is a Think or Swim issue of them moving the lines. It happens. 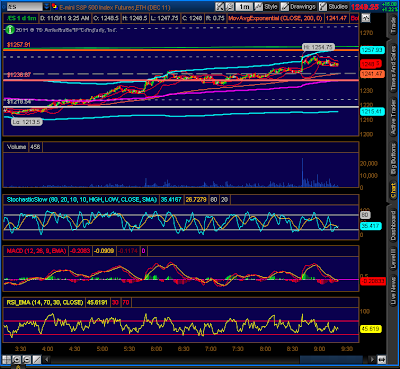