Demise of DELL or will it "ring" the DELL? 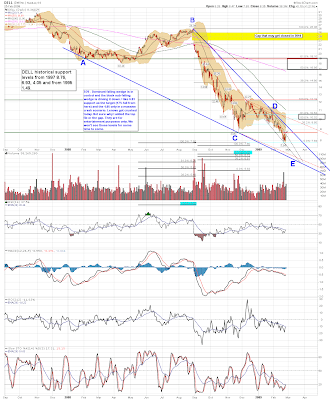 With DELL earnings after the close on Thursday I thought I'd take a crack at this former bellwether to see if there is any life in this old dog. From the chart you can see DELL has not avoided the precipitous plummet that most equities have taken. Dell has held its value relatively well as compard to some others (really!). Being in the tech sector it has received some "dividends thru association" that it may not have deserved and the price may be artificially inflated.

Remember what happened to HPQ when they gave a bad forecast? Ouch to say the least, thus I believe DELL won't make the same mistake. Lenovo just got pummelled and I expect the same for DELL. One great point that was made on FastMoney after the close today was that DELL just does computers and that is it. No phones, MP3, no nothing other than computers and they are/have missed the boat. If they have the vid posted I'll add the link in the morning.

Here is the deal: You work for a company with 1,000 employees. They all have relatively new computers and there are a few hundred lying around. Well, they just laid off 200 people, so now there are another 200 workstations sitting idle. The company is starved for cash. Do you think they are gonna go upgrade the remaining 800 pc's to improve productivity? Add a bunch of new servers? How about the machine you are working on now. I'm sure it is good enough to get you thru another year till this mess is over. OR how about all those PS2's and Xbox players that are multiprocessors, they are taking market share as well. Dell's market is PC's and that's it. No one is buying them nor will they be.

Bottom line is I have included the historical support levels on the chart for a reason. Given market conditions (Uh...Wave 5 folks) and the economic environment, I don't see any way DELL can make earnings and announce enough job cuts to appease the market this quarter or next. I like to follow the earnings trough to the bottom of the market. Companies keep lowering and lowering estimates to a point where if you or I ran the company we could beat estimates. I am estimating that DELL is still at least 2 quarters from this point. Dell almost died a few years back and Michael had to come back to lead the company. I'm not sure is Steve Jobs announced he was moving to Dell if that would help.

Looking at he chart I have drawn a nice large blue falling wedge. Inside the wedge, conveniently approaching earnings, is a smaller black falling wedge. 17% from today's close is the support at $6.93 from 1997. I like this number sooner than later. I'm shying off from the $4.05 number now, but I do not believe it is out of the realm of possibility before this market ends. You see that "E" touch? It is down there for a reason. It should have one more touch of the bottom trend line, but it does not have to. The dashed red channel is a possibility for future contained movement after it leaves the wedge and begins to consolidate.

If DELL were to somehow surprise, can't believe I am even writing this, 38% retracement at $9.50 is all I am willing to give it. Again, I'll refer you to Lenovo and HPQ's performance and guidance. Maybe this latest black wedge down is it and the bad news is (gag) "priced in". That is very possible.

Play it as you will. Up or down. I do not recommend buying anything or speculating on earnings actions. I am extremely conservative. I prefer to miss the move and get it right after the fact, and I suggest you do the same. Profits are not as good, but the risk can be mitigated to a great degree.